There’s a little bit of a back story to the comment, “You’ve Got a Good One, Ma’am.”

On the Thursday of Spring Break, Paul and I took Walker to lunch at Whataburger. Now it’s not rare at all for Walker to be with us when we go out to eat. He usually goes out to eat with us every Sunday, as well as random other days if he’s not in school. He is our “son” (as many people refer to him as such)….Here’s a picture of the “father/son” duo– 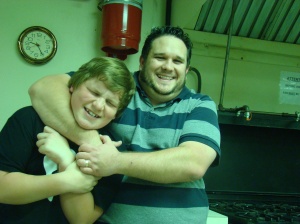 Not thinking anymore of that day, I went to work at the Food Pantry this past Friday. About an hour into working this older gentleman came up to me, tapped me on the shoulder and said, “You have a nice husband and kid, ma’am.” (Well, clearly I thought he was mistaken because I don’t have a kid). I told him, “Uumm….I don’t have any children.”

And here’s the rest of the conversation:

Man: “Yes, you do. You’ve got a good one.“
Me: “UUUmmm…..OK.” (still very confused)
Man: “They’re the ones that helped me at McDonald’s last week.” (We were actually at Whataburger, but now I was starting to remember)….
Me: “Oh, yes, I remember. But, that’s not my son. He’s just a friend. My husband and I just took him out to lunch that day.”
Man: “Well, your husband and your son (clearly he didn’t hear me earlier–and I didn’t really feel the need to correct him) were the only ones that came to help. Everyone was driving by, but nobody helped me.”
Me: “Well, you’re certainly welcome. That’s just who my husband is. He sees a need, and if he’s able, he helps. That’s just who is.”
Man: “Well, it makes me think that there are still good people in this world, and you’ve got a good one, ma’am.”
Me: “Yes, I do, sir, yes, I do.”

I was humbled at that moment….humbled and blessed because yes, I do have a “good one”–I am married to Paul, who has such a servant’s heart.

The same day I was at the Food Pantry our friend, Gene, shared something with the volunteers (as we were preparing to work). He said there is a difference between those who are hard workers and those who have servant hearts.

There’s nothing wrong with being a hard worker, but usually hard workers work….just to work. They really don’t think much about who they are working for or the people they are effecting along the way.

Those with servant hearts not only work hard but they understand who they are working for and the impact they make in people’s lives along the way.

This really struck me, and I’ve been thinking about it since Friday. I really want to have a servant’s heart…..In all honesty, I think I usually do, but I will confess that some days sin and my selfish desires come out to play and I forget about others and only focus on myself. I’m not perfect (I know, I know….it’s hard to believe)! 😉

So, if you desire to have a servant’s heart, what does that look like? What does it mean?

To have a servant’s heart I think you have to be:

To be humble (according to my good friend, Webster) means to NOT be proud, ranking low in hierarchy

Humility is when you’re so focused on serving other people that you don’t even think about yourself. 1 Peter 5:5b states, “And all of you must clothe yourselves with humility in your dealings with one another, for ‘God opposes the proud, but gives grace to the humble.”

I want to be PASSIONATE about helping people not just sympathize with their need.

(I think this is what I struggle with the most. I want to be “helpful” but I also want to be “comfortable.”)

And, I’m afraid, in all honesty, that you can’t be both. In order to be helpful and display compassion–and MEANT IT–you have to get out of your comfort zone and seek sometimes the unpleasant, the unwanted, the unspeakable, the undelightful, and even the unthinkable. Is there something that needs to be done that no one else is willing to do because it’s uncomfortable? Maybe that’s what YOU need to be doing….

In Matthew, chapter 9, the Bible says that Jesus was filled with compassion. Matthew 9:1-2, “Getting into a boat, Jesus crossed over the sea and came to His own city. And they brought to Him a paralytic lying on a bed. Seeing their faith, Jesus said to the paralytic, “Take courage,son; your sins are forgiven.” In Matthew 9:22, Matthew says, “But Jesus turning and seeing her said, ‘Daughter, take courage; your faith has made you well.’ At once the woman was made well.”

A servant obeys God, not out of convenience but conviction. Many believers want to serve the Lord if it’s convenient, but a real servant will serve the Lord from conviction. “The one thing required of a servant is that he be faithful to his master.” 1 Corinthians 4:2

A servant will put others before himself. In order to put others before yourself, you must relinquish the right to be first. (Which is SO HARD sometimes)…..There’s an acronym that was/is taught to young children that is:

In other words, you have to put Jesus first, Others second, and Yourself last.

The apostle Paul clearly depicts Jesus as being selfless in Philippians 2:3,4. He says, “Do nothing out of selfish ambition or vain conceit. Rather, in humility value others above yourselves, not looking to your own interests but each of you to the interests of the others….”

As Christians, in our journey to mature spirituality and learning and growing as believers, we must not forget what it means to be a servant. And a servant was certainly the one quality that Jesus possessed throughout His entire ministry. Jesus even said, “For even the Son of Man did not come to be served but to serve, and to give his life a ransom for many” (Mark 10:45) The apostle Paul added to this focus when he wrote, “Each of you should be concerned not only about your own interests, but the interests of others as well” (Phil. 1:4). But then pointing to the Savior as our great example, he quickly added, “You should have the same attitude toward one another that Christ Jesus had.” Paul then followed this exhortation with a strong reminder of the humiliation of Christ (Phil. 2:6-7) “Though he was God,he did not think of equality with God as something to cling to. Instead, he gave up his divine privileges he took the humble position of a slave and was born as a human being”

There is no question that, if we as Christians are going to grow and mature into Christ-like character, we must experience progress in giving of ourselves in ministry to and for others.