When Paul and I lived in Illinois we tried to go “out of town” every 6 weeks or so to spend the night in a hotel somewhere, away from camp. Sometimes we would go to Peoria (only 30 minutes away) and sometimes we would go to the Quad Cities (about 2 hours away). We loved just “getting away” from everything and enjoying a night together….of course, back then, we didn’t have TV, so we also looked forward to watching TV, too! 🙂

Well, Paul and I decided to go to Houston and spend the night…away. We went out to eat, to a concert, went to have dessert, and stayed in a hotel. It was nice…..

Paul’s favorite restaurant is Genghis Grill. The closest one is in Austin, but we found one right next to our hotel–he was in HEAVEN!! 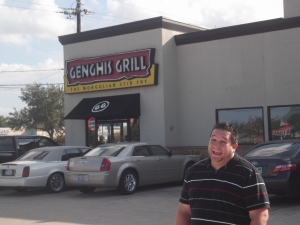 Paul in front of Genghis Grill

a date out with my honey….

After dinner we went to a concert at Gateway Co*omunity Ch*urch in Webster (south of Houston). We were really going to see All Sons and Dau*ghters (a Christian group that Paul and I really like). They were the opening band for Kari* Jobe* who is another Christian singer. Warren Bar*field also performed….overall, it was very good.

All Sons and Daughters

us at the concert

After the concert I introduced Paul to Pink*berry. My mom and I had in New York a couple of years ago, so I knew it would be good! 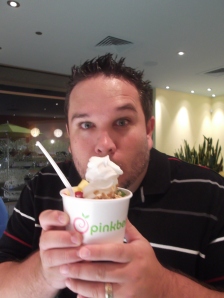 He told me he wanted to show me an “intense” face!

YUMMINESS in a cup!!

We stayed the night in hotel, right off of I-45 and just took it easy on Saturday morning. Everyone (on FB) was saying how nice the weather was on Saturday morning…..well, we, apparently, missed it because we didn’t leave the hotel until 12:00 (noon)! 🙂

When we checked out, Paul went to “Heaven” AGAIN!!!

Round Two for Paul!!

I wasn’t feeling too good and didn’t want to eat lunch with him….so I left him there and I went to Old Navy (across the highway). It was C-R-A-Z-Y busy….like the day after Thanksgiving busy. I wanted to buy a pair of jeans that I found on sale, but there were 36 people in line (Yes, 36)!! So, I opted out of buying the jeans and went back to pick up Paul.

On the way home I finally got hungry (around 2:45)–so we stopped and I got Long John Silvers!

I still wasn’t feeling good, so I came straight home and slept from 4:30-8:15PM….not too much better today, but I did go to church this morning and tonight….

Here’s to another week of crazy sports schedule!! We have games EVERY NIGHT to go watch!